The biblical story of Esther has fascinated me since I was a little girl. When I found out that Angela Hunt was writing a novel about her, I knew that I had to read it! 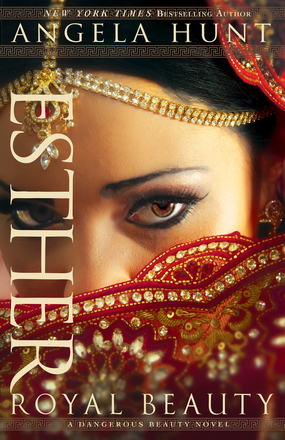 Esther: Royal Beauty, is a story told from two different points of view. The chapters alternate between Esther herself, and Harbonah, the king’s servant. This type of writing is tricky to pull off, but Angela Hunt does a fabulous job with it. The advantage is that we are given a more complete picture of what was going on in the kingdom. In fact, my favorite thing about reading this book was that it gave me such an in-depth look at the story. Particularly the fact that the story happened over the course of many years. (Something I tend to forget!) I also found it interesting to learn that Vashti continued to live in the palace after she was removed as queen. As the mother of Xerxes’ successor, she still wielded a fair amount of power. All of these little tidbits kept me glued to the book even though I’ve heard the story many times over. I really couldn’t put it down!

In the author’s note at the end of the book, Angela shares that she drew on the writings of Herodotus in addition to the Bible. Naturally, writing a novel required an author to “fill in” some details, but the events chronicled in the book, do have their basis in historical writings. I appreciate it when a writer takes the time to do this kind of research when writing historical fiction!

I greatly enjoyed reading Esther: Royal Beauty, and I highly recommend it to anyone who enjoys historical fiction from this time period. There is no profanity or explicit love scenes in the book, but there is some violence. I would say it’s appropriate for both teens and adults. Though, do keep in mind some of the sensitive themes it touches upon and preview the book before passing it along to younger teens. Homeschoolers with high school students might consider reading this during a study of Ancient history or the Old Testament.

Esther: Royal Beauty is the first in a new Dangerous Beauty novel series from Angela Hunt. Based on how much I loved this first book, I’ll be sure to keep my eyes open for the next one!

Note: I received this book for free from the publisher in exchange for my honest review. The opinions expressed are my own.