Because He Holds My Hand

As a teenager, I said many times that I would never get married. I had some deeply personal reasons for saying that. I truly meant it. But God had different plans. God gave me a wonderful husband. Why does my husband rock? Because he holds my hand.

There was still snow on the ground, and a snow bank between me and a better view of the fireworks. I was trying to climb over that bank when he offered me his hand. It was the first time that he held my hand. It was before we were anything more than simply friends, but it showed me that he was a gentleman.

Months later, we went to my cousin’s Bible school graduation for our first “date”. On the drive home late that afternoon he told me, “There’s something that I’ve wanted to do all day.” And then he held out his hand to me. I slipped my hand into his as I would do again so many times in the years to come.

Whenever we pray together, he holds my hand.

On our wedding day, shortly before the ceremony, I stood there in my white dress dealing with an attack of nerves. Not because I was about to marry this incredible man, but because I’d have to stand in front of a crowd of people to say those vows. He was so very handsome in his navy blue tux as he took both of my hands in his. His firm, yet gentle grip reassured me more than words ever could have.

When I have the occasional meltdown, he again takes both of my hands in his and gently tells me that I need to calm down. He does this with such love, that my frayed nerves can’t help but be soothed.

He held my hand the night that my Mom died unexpectedly. On the way to the hospital, he held my hand as he drove and I prayed. Then on the way home, when there weren’t any words that could take away the ache, he simply held my hand. And that comforted me more than words.

I can’t begin to guess how many miles we have walked together in the past twelve years, but whenever we take a walk together he holds my hand.

He has held my hand through three miscarriages. He was there at the doctor’s appointments and hospital visits each time. And through all of it he held my hand. And I felt safe with him there beside me.

I’ve held onto his hands with a painful grip during the births of each of our children. He never once complained! And when our fourth planned homebirth became a trip to the hospital he held my hand. I looked at him with tears in my eyes and whispered, “I’m just so scared.” He squeezed my hand back and said, “I know,” before wrapping his arms around me. I knew that whatever we were facing, he would be with me to hold my hand.

Every time he raises my hand to his lips and tenderly kisses it, I feel like a princess.

At night when all four kids are tucked in and our heads finally rest on our pillows, he reaches out his hand to hold mine. And I sleep easier knowing that he is there beside me.

Holding my hand might sound like such a small thing. But when his hand catches mine, there are years of memories in that simple touch. Because he holds my hand, I know that a good man loves me. 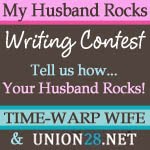 Author Interviews, Picking up the Pen